Masha and The Bear Costumes

Masha and the Bear is a Russian animated television series that has delighted both children and adults. Your little ones can now be part of these fun adventures with our Masha and The Bear costumes. Find everything they’ll need to recreate the blossoming friendship between a kind forest bear and a lively Russian girl. Masha lives in the woods and has several pets: a dog, a goat, and a pig. But most forest animals avoid Masha because she insists they play with her. One day, while Masha chases a butterfly, she stumbles into the home of a bear who isn’t home. Masha decides to stay over and play, but ends up making a mess. When the Bear comes home and sees what Masha has done, he tries to get rid of her…but, it is useless. He and Masha end up becoming great friends. These Masha costumes are some of our favorite cartoon costumes…and we’re sure they’ll be your little ones’ favorites too! Masha’s costume features a white shirt, a pink dress and a matching head scarf. You can even add a blonde wig for the perfect Masha costume! You can also plan the best children's party ever with our Masha and the Bear birthday party decorations. Shop for banners, plates, napkins, balloons and lots more in your little one's favorite cartoon theme.

Available
Not Available
Quick view
-30% OFF

Masha and The Bear, your favorite cartoon costumes!

If your little girl is a fan of Masha and the Bear, she’ll love our Masha costume. It features a pink dress with a white shirt and our little Russian friend’s coordinating head scarf.

She’ll live endless adventures with her friends, starring as an energetic Masha who plays with her forest friends, laughs, sings, and has loads of fun unleashing her imagination.

The Bear’s costume, an endearing friend 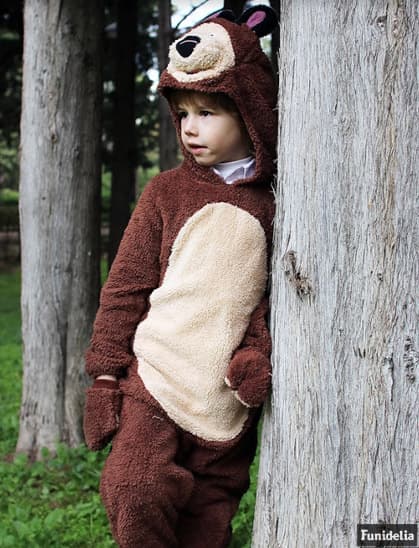 The costume includes a dark brown jumpsuit with a hood that features the Bear’s smiley face and ears, and mittens for the Bear’s hands. Super soft and warm, it’s the perfect costume for the next Carnival or costume party.